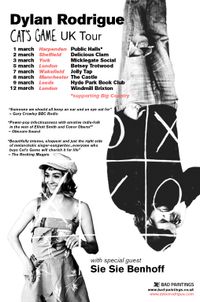 Pay What You Feel.

Dylan Rodrigue hails from Los Angeles and plays his first UK shows in March in support of his debut album Cat's Game released by Bad Paintings. Joining Dylan on tour is his side kick and fellow LA singer songwriter Sie Sie Benhoff.

'reared in a yoga-based community in Northern California, educated at CalArts (where he earned a degree in songwriting and avante-garde composition) and found inspiration in the work of artists such as the Beatles, Fugazi, the Pixies, Elliott Smith and Vic Chesnutt' - Buzzbands LA

'His work runs the gamut from solemn folk to fuzz rock. Rodrigue has gone from everyone else’s guitar-man to leader of the band, and we like what we hear' - American Standard Time (KEXP)

Dylan Rodrigue’s music has always been a journey, exploring all genres and musical forms. Dylan was raised in small yoga-based intentional community in Northern California . . . a very quiet and peaceful place with a quiet and peaceful music scene. This all changed at the age of seven when Dylan’s father snuck a copy of Who’s Next into his bedroom. This sparked a passionate exploration of music from the Beatles to Fugazi, the Pixies, Elliott Smith and Vic Chesnutt. He began playing guitar and writing his own songs at age 8, studied classical guitar in high school, and eventually obtained a degree in songwriting and avante-garde composition at the California Institute of the Arts (CalArts).

Dylan’s professional career in L.A. has shown the same sense of adventure. As a talented guitarist and singer, he has performed with alt-country bands (currently with Sie Sie Benhoff), complex math rock/hardcore bands, and a 13-piece travelling vaudeville band! With the release of his debut album Cat’s Game, Dylan returns to his true passion . . . sharing his own music.

Dylan Rodrigue’s musical journey is wide, varied and unpredictable . . . and it's definitely a trip worth taking!